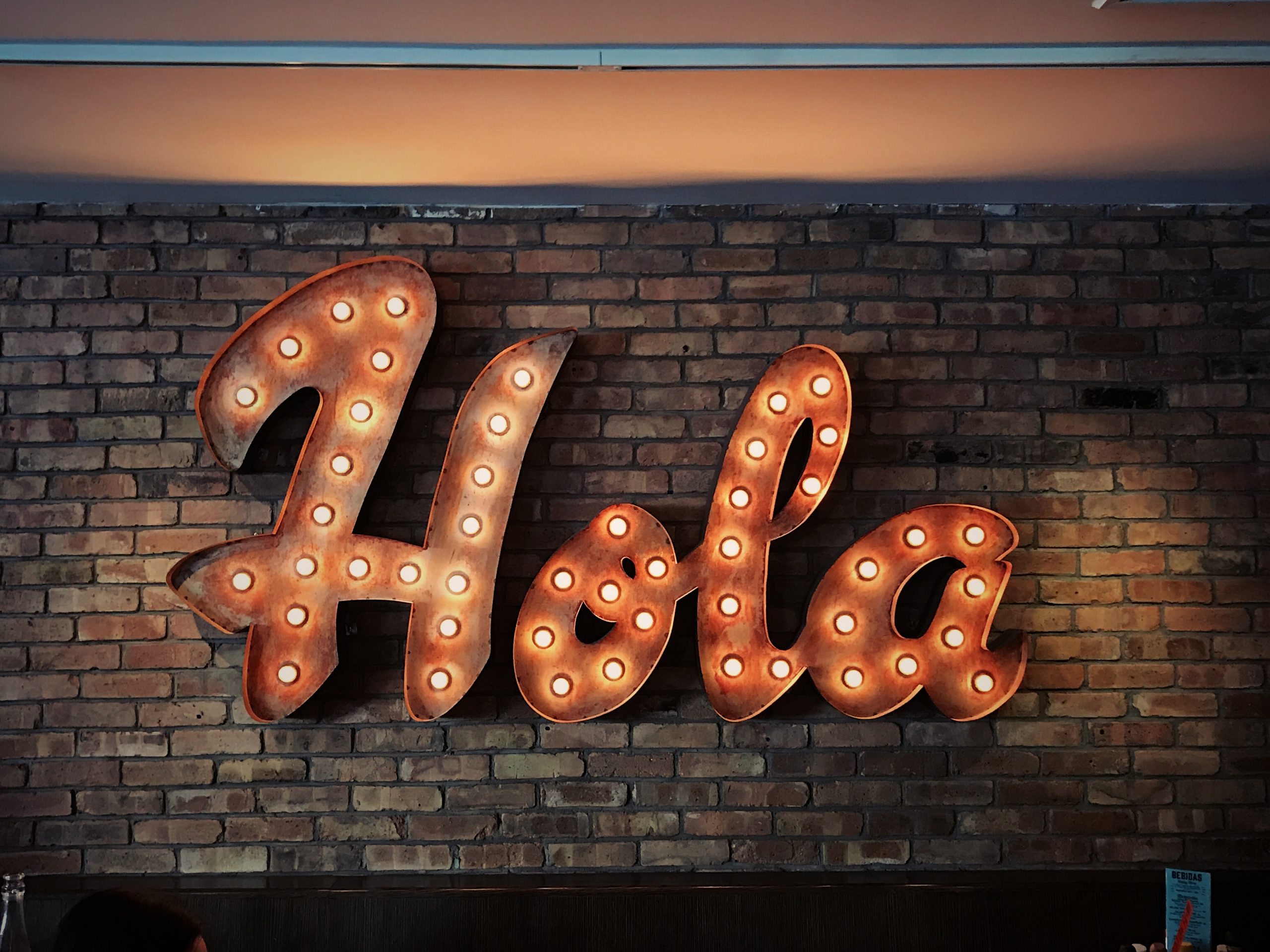 Throughout the article you will be provided with a number of tips which might be very useful, trust me. In case you’d like to quickly read about the following, just click the link:

From my Dutch background I tend to think and act in a rather structural way. Structure is also exactly what has helped me during the sessions I’ve had with my good friend Miguel. He was working on his English and I got to further improve my Spanish.

We have divided the sessions into three theme’s, normally focusing on a maximum of 2 out of 3 per session: Speaking, Writing and Grammar.

We agreed upon actively supporting each other’s vocabulary, something we could do alongside the other things we were working on. We both, individually, were keeping a list of new words, phrases and expressions which helped and encouraged us to actively keep track of all the new vocabulary we were learning.

Tip 1: Have one or more online documents where you keep track of your progress and where you take notes. Share this with your buddy (at least the main document – you can (I advise you to) take a document on the side for your own notes) so you can actively provide each other with feedback.

I would highly encourage you to create a document (e.g. Google Document) which you share with your buddy. In this way, you both have access to the same file which is a convenient way for additional feedback, sharing links and (highly important) to be reading back to what has been written down beforehand.

Tip 2: create the habit to keep track of new words and phrases you learn and to actively revise them. I have built this into my own weekly routines and I’m looking at my notes and new vocabulary on 3 set moments during the week.

How to improve your language speaking skills?

It took us a couple of times to really get the hang of it and to come up with a structure that worked well and productive to both of us. We started off the first time with just chatting and after about 45 minutes (which were already fairly intense) we realized we only had been speaking in one language. We changed to the other language (both of us) but due to poor time and energy management, the last 15 to 20 productive were not very productive.

On one hand it doesn’t seem like a bad idea to just set up a video call and chat away. After all, the goal is to be speaking the language of your choice and the online conversation is doing just that. However, the efficiency I experienced compared to meeting in person was amazing and I grasped much more information during the online sessions compared to the offline meetings.

Tip 3: to me the video-calls worked out very well. It felt ‘more official’ compared to meeting face2face (which you surely should do too from time to time) and I was able much better to maintain a solid focus. Furthermore, you have the possibility to actively take notes, which normally does not apply as much when meeting someone in person.

As I mentioned before, just having a chat could work in some way but I felt other ways turned out to be much more efficient and productive. After about 3 meetings, Miguel and I decided we would follow a schedule which we changed week by week. For 25 minutes Miguel and I were talking in English which was concluded with a 5 minute recap of the notes I’d been taking. After those 30 minutes in total, we changed to Spanish while Miguel kept notes of the things I could work on even more. Again, we concluded with a short recap of the most relevant mistakes I had made.

Tip 4: when one is speaking, have the other one taking notes in a document that the other person cannot see. It can be very distracting to be reading along on the other’s notes. In case you’d be working within the same document, try to be writing down your notes on a different page.

I noticed that it worked best if I had prepared a topic, as well as something to be focussing on. This could be the past tense, the future, conjugations, vocabulary or anything else. The times I ‘just showed up’ were by far not as productive as the sessions I’d prepared. Additionally, it can make it much more fun because in case you’d have a buddy that you only speak during the language practice, you will find that you might not have that much to discuss (anything besides the last weekend).

Tip 5: prepare a topic to be discussing and think of a specific focus point you would want to be working on.

How to improve your writing skills?

The best and most efficient way to improve your writing skills is (who’d have thought?!) to write. Miguel and I found that we improved (across other disciplines of the language too) even more when we started to write. At first, it felt a bit weird to be writing each other a letter but after the first letter I knew it would improve my overall skills by much.

When writing you will have to force yourself to be actively focussed on the language. As it is written, you will know that it will be read by your buddy. He/she will even be able to read it again, and again. This encouraged me even more to be writing a letter as good as possible. Moreover, when writing, you have more time to be looking for words (compared to speaking) – in fact, you even have the time to be looking up words. The latter is a great way to be increasing your knowledge of vocab.

Tip 6: when writing a letter, you will be focussed even more on the language – on several aspects.

Miguel and I agreed to be writing a letter on a weekly basis (as we were also meeting once a week). The letters we wrote we would post in the shared Google Doc so it would be easy for the other person to find, as well as to give feedback (you can just add a comment to any word/phrase).

Tip 7: write the letter in a program that does not have spelling correction. Google Doc. will tell you all the mistakes you are making and in that way you will not be as likely to learn quick. It would make a great impression on your buddy if your text is almost without mistakes but remember: you do this for yourself. You want to learn, it’s not about impressing your buddy (that you might do later, when you really master the language).

Like speaking, also here it pays off to actively be thinking about a subject. Simultaneously, you might as well be trying to find a different topic of the language to be focussing on. Week 1 you will be writing about something that has happened last summer and week 2 will be about the amazing weekend plans you have ahead of you. Week 3 could be about your current thoughts of the upcoming political elections and the week after might have last night’s football game as a topic. You can play both with the topics and the tenses to be used.

Tip 8: when writing, pick topics you would likely be writing or talking about yourself anyway. In that way, you can already practice (while knowing you will get feedback) for a conversation in the (nearby) future.

When you have written your letter, it’s time for some feedback. What Miguel and I did was to have the person that wrote the letter read the message out loud. In that way, you can practice with speaking (and a bit of ‘storytelling’ perhaps) too. After having read the entire letter, the other person would start correcting the letter.

Tip 9: When the ‘expert’ will correct your letter, make sure to write notes based on his/her feedback yourself. When noting down something yourself, you will be much more likely to actually remember the reasoning behind certain feedback (compared to when you would be reading the comments of the ‘expert’). The other person would be more than welcome to add additional feedback to the comments section, but make sure to have added the main bit yourself.

How to improve your grammar skills?

One thing that is very important to take into account here: your buddy (likely) is not a trained language professional. Some people have a thorough understanding of their mother tongue (or the language they are ‘teaching’ you). However, you both would have to realize that you just do not know everything. Speaking a language for 20+ years does not mean automatically that you know the exact rules that apply.

I personally used the sessions with Miguel mainly to be tackling the structural mistakes I would make. In case I would be corrected all the time about the past tense, I would know where I would have to improve. In Spanish (like many other languages), some of the rules are so complicated that a ‘regular person’ would not be able to explain them properly.

Tip 10: if you do not know the exact answer or explanation to a certain question, just accept and acknowledge that. Embrace the fact that you just have to say ‘no’. I am convinced that someone rather would say no than to provide the wrong information.

It also happened to both of us that some rules we simply weren’t capable of explaining to the other person. And that’s fine. We both did improve immensely and that always has been the aim. I’ve also written another article about improving your language skills which also includes a number of ways where you can get a professional help you out – which normally would be a paid service. However, these services certainly do not need to be costly. In addition to the language lessons I’ve done with Miguel, I got in touch with a teacher through italki (where you will find people all over the world, ranging from rather low hourly rates to more costly options). Since I had figured out the areas where I needed improvement, I could have a couple of very efficient and well-focussed sessions with a teacher that was living on the other side of the world.